A group of Wirral Met students have recently travelled to London to follow in the footsteps of their heroes.

Ten students studying on the NVQ Football Studies programme have had an exciting few days visiting the Football Association (FA)’s national football centre in Staffordshire, (the home of the England national team) for a tour of the facility and a coaching session delivered by an elite FA coach. 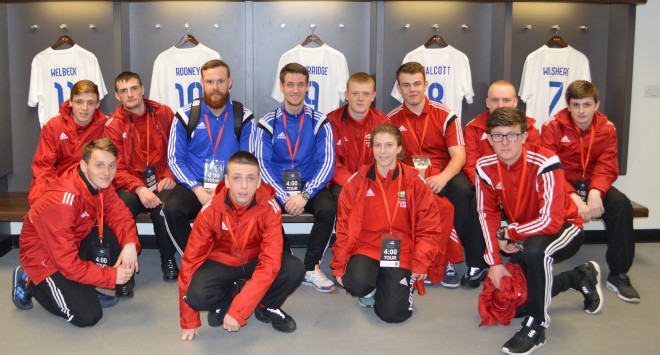 The session was held on the indoor 3G pitch, which is the only indoor pitch in the UK that can host a UEFA Champions League fixture. They focused on attacking principles and quick play which the students found both beneficial from a playing point of view, but also from a coaching point of view, as they are all aspiring football coaches working towards their level 2 activity leadership qualification. Football student Callum Jones was impressed by the visit and commented “It was the best day of my life up to now. To follow in the footsteps of my idols by training in the same facility felt like a dream come true”.

The students then travelled down to the capital, where they were welcomed by Arsenal Football Club and took part in a festival of football with Arsenal in the Community. The team of students were then treated to a guided tour of The Emirates Stadium by two Arsenal Football Club coaches and later took a tour of our national stadium, Wembley. Peter Deer, Wirral Met College Football Studies student explained “To be able to go to these world class facilities and train is an opportunity you can’t afford to miss” and Ryan Topham added “Playing with Arsenal FC was a challenge but gave me the biggest smile. It was unreal”. The students were joined by course tutors Stephen Owen and Michael Burns who each commented, “Overall, it was really good for the students to see different styles and approaches to coaching over the three days, which will stand them in good stead for their future development as coaches”.

“Some of the students had never been that far away from home and by having the opportunity to mix with people from another city and from different cultures will prove to be very beneficial as they continue in their coaching careers”.

The course runs alongside the college’s football academy and offers students the opportunity to represent the college in weekly competitive football league fixtures for both males and females. From September 2015, the introduction of the FA Level 1 Coaching Certificate will also be offered as part of the course. For more information on these courses or any other courses available at Wirral Met College speak to one of our Student Advisers on 0151 551 7777